We won a Bookmark Award for email marketing after being commissioned by our longstanding client Chris Willemse Cycles (CWC) to create an email marketing campaign around its 35th anniversary that would drive sales through its online store.

The brief was to create and maintain a long lasting hype around the birthday celebrations that would deliver sales during the quiet winter season. The world of cycling has evolved since they opened their doors and they now face much more challenging competition.

Given this, CWC wished to focus people’s attention on two core messages: the company’s longevity - few competitors in the bricks-and-mortar space and none in the online space have such a history; and, secondly, the company’s commitment to providing its customers with value for money.

CWC has a database of 30 000 active cyclists who subscribe to its newsletter - this represents a substantial portion of South Africa’s economically active cycling community who form its core market. While the focus for the campaign was to reward existing customers, CWC was cogniscant that the promotion could be used to build awareness among new prospects, expand its newsletter mailing list and grow its Facebook and Twitter communities.

2Stroke (this was in the days before we rebranded to Rogerwilco) conceived a campaign that would last 35 days - one for each year being celebrated. On each day, selected products would be offered at a discount.

An immediate challenge was identified: how to maintain audience interest in the promotion without oversaturating email inboxes or disenchanting customers who had specific requirements and weren’t interested in the promotion at all.

We took a decision to send out a weekly newsletter for the duration of the campaign. To create an element of intrigue and to encourage people to visit the site repeatedly, we created a pop-up which would launch on a visitor’s first visit to the site.

The pop up took the form of an advent calendar highlighting 35 dates. The current day’s item was unveiled at 9am with a countdown timer indicating how long it would remain on offer at the reduced price. Future day’s products were shrouded with a question mark, while previous promotions were visible giving new visitors a chance to see the special deals they’d missed out on. 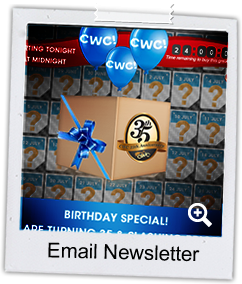 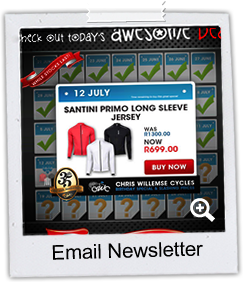 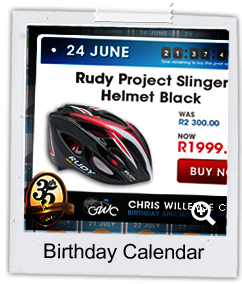 With just 35 units of each promotional item available, a sense of urgency was created which would encourage impulse purchase.

The campaign initiated with a teaser email indicating that something big was about to happen. A newsletter was distributed on the eve of the anniversary celebrations with weekly mails following.

Although the campaign was intended to reward existing customers and was only promoted to subscribers, newsletter signups increased by 15%, while CWC’s Facebook community grew by 30% with Twitter putting on a similar % growth.

The real measure of success, however, was commercial. The number of transactions conducted through the online store grew by 245% year on year.