I’ve been reading about influencer marketing with a growing sense of trepidation of late. Word-of-mouth recommendation is a marketer’s catnip. It makes us cartwheel, whoop and holler for joy … because nothing drives sales like peer endorsement. But I fear that, just as overzealous SEOs killed off the guest blog as a meaningful link-building tactic, so greedy brands have slayed the golden goose of influencer marketing.

Well, if it’s not dead, it’s certainly plucked, and the coup de grace can’t be far off.

According to McKinsey, for all the money brands spend above the line, it’s a word-of-mouth recommendation from a trusted source that most often convinces a consumer to buy. Indeed, it suggests that word of mouth is the primary factor behind 20– 50% of all purchasing decisions.

I’d like to focus on the word trusted. To many of us, a useful recommendation is one that’s proffered by someone we know or someone we respect. It’s generally heartfelt and it’s almost always made with our best interests in mind.

One of the first recognised cases of influencer marketing took place during Super Bowl XX1 back in 1987. Minutes before the end of the game, New York Giants quarterback, Phil Simms, was instructed to repeat the line “I’m going to Disney World” in his post-match interview. While the line may have seemed a little forced, Simms — who had just been named most-valuable player — certainly had the trust factor in bucket loads. And it didn’t seem that unusual a construct for a sports star with a young family to want to unwind in a leisure park after a strenuous season.

Nearly 30 years later, corporates have piled into influencer marketing, yet sadly the trust factor is all too often missing from their campaigns.

One of the clearest examples of a staggeringly insincere post by an influencer was from “Keeping up with the Kardashians” star, Scott Disick. In May this year, he inadvertently managed to cut and paste his agent’s instructions as to when he should load his Boo Tea product endorsement to Instagram. 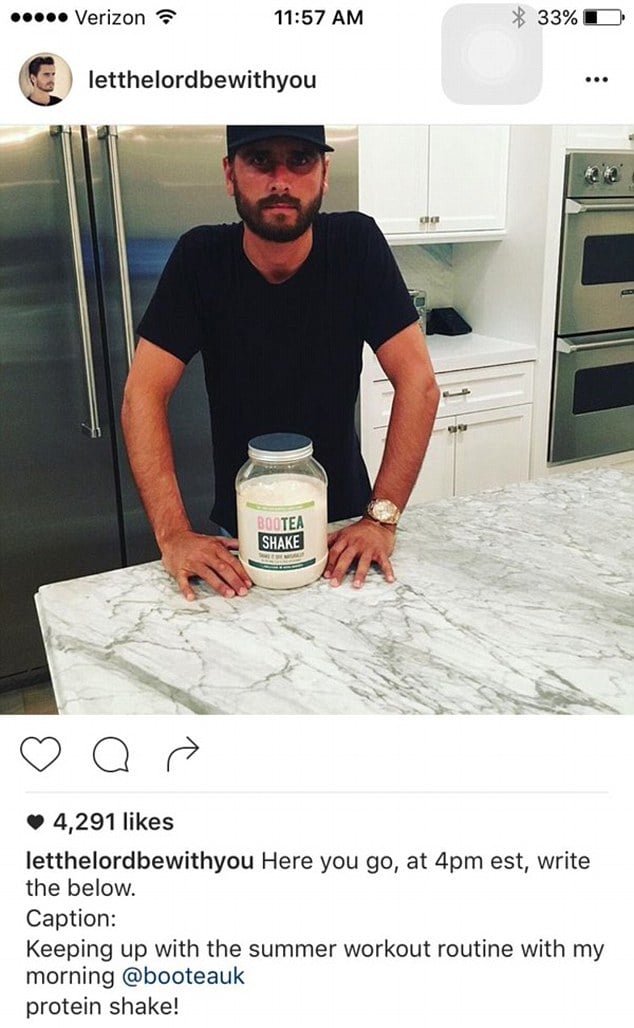 Ironically, it seems many of the brands asking celebrities to promote their wares are missing the mark. A study by Variety magazine found that the top five most-influential figures among American youths were all YouTube stars, not actors, athletes or musicians. Kim Kardashian didn’t even crack the top 20.

The increasing commercialisation of celebrity endorsement has provoked a degree of soul-searching over in the US, where it’s most rife.

Indeed, so far has the needle moved on trust that the Federal Trade Commission was prompted to update its guidelines on acceptable native advertising, requesting that influencers explicitly state when a post is sponsored by placing the words “#ad” or “#sponsored” at the start of each update. While there’s no hard-and-fast legislation, the FTC bared its teeth in July, taking action against Warner Bros over a marketing campaign it ran with YouTube videogame influencers. As part of the settlement, Warner has agreed to make clear disclosures in all future influencer campaigns.

Perhaps the most-poignant move to clamp down on paid endorsement has come from Amazon, which last month announced a ban on incentivised reviews. The retail giant has always been big on reviews, acknowledging the role they play in instilling trust and confidence in purchasing decisions. For some time, it’s accommodated incentivised reviews but has required the poster to include a disclaimer acknowledging that they either received a free copy of the product or were paid for their endorsement. But, of late, it’s been hit by a plague of reviews-for-rent which have grown from 2% of all site reviews a couple of years ago to the majority today. Not surprisingly, incentivised reviews are often more favourable than earned reviews.

So, where to from here for organisations looking to capitalise on influencer endorsement?

As Louis Gossett Jr. reminded us in the Windhoek Lager ads, perhaps it’s time to ‘keep it real’. There’s simply no substitute for authenticity and, the minute we lose sight of that, we run the risk of tarnishing the very brand we’re looking to promote — which, as Mashable reports, is effectively what Disick did to Boo Tea.

This article was originally published by MarkLives.

The Metaverse: Definition, History, and Future

The importance of hashtagging