With people flocking to Instagram, Snapchat et al (Statista predicts 2.95bn people, a third of the world’s population, will have at least one social profile by 2020), it’s no surprise that brands are following them. They’re even doing so in such large numbers that American market research company, Forrester, has been encouraged to increase its forecasts for social adspend in the coming years; it now projects that, by 2021, advertisers will spend US$101.4bn (up from its previous estimate of US$84.3bn) promoting posts and running ads — largely in video content. 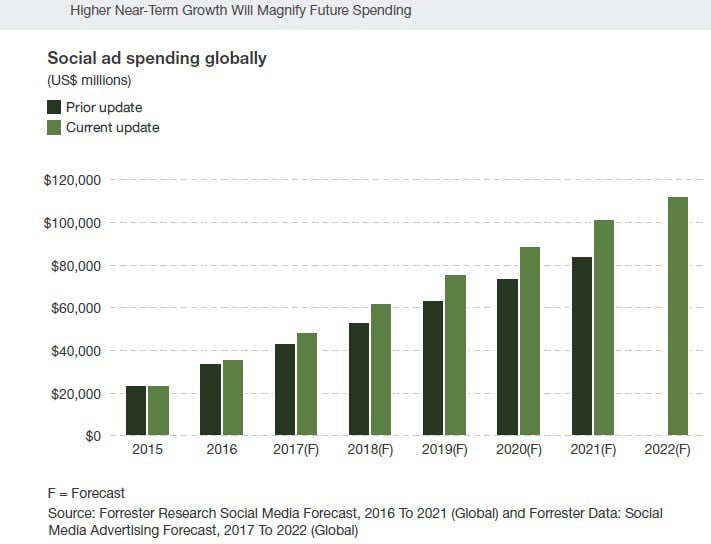 Advertisers love social because it offers a range of advanced targeting options.

While Google’s search advertising allows users to select basic demographic or geographic filters, social networks offer much more granular targeting based on the vast amount of user information they gather around interests, behavior and people’s connections. To a hungry target-focused marketer, that’s catnip of the highest order.

Video, and particularly on mobile, is where social advertising’s at. Around 110 years of video are watched every day on Periscope, probably the least adopted of the popular platforms.

Naturally, Facebook, cognisant that its newsfeed inventory all but sold out, is making a big play with its video-ad project. Earlier this year, it announced that it was introducing mid-roll ads but user feedback was poor and rumours quickly began to circulate that Facebook would kill them off.

Therein lies the advertiser conundrum: the goose is laying beautiful golden eggs, but there’s a real risk that consumers will turn their backs on social media if it becomes overly saturated with adverts. In a report published last year by Kantar TNS, 26% of consumers report that they actively ignore social posts from brands.

At a country level, Scandinavians are the most sceptical, with 57% of respondents stating they’re simply not interested in the messages corporates push into their feeds. The Saudis (15%) appear to be the most trusting, while South Africa is bang on the 26% average.

Interestingly, the Kantar study found that the best way for brands to engage young audiences is by using celebrity influencers. The youth, it appears, are far more likely to believe that a certain carbonated soft drink is good if the words come from Kendall Jenner’s mouth than if they’re uttered by Pepsi.

With social media still in its infancy (staggeringly, given its omnipresence, Facebook only became a teenager this year), it’s too early to determine what’ll happen when these youngsters who hang on celebrity utterances become more discerning. But it’s clear that the authenticity endorsement delivers means that it’ll continue to be the go-to tactic for brands looking to engage audiences. Compare Swedish vlogger PewDiePie, who has 57m YouTube subscribers and 13m Instagram followers to Coca-Cola, one of the largest-spending brands on social, which has just 1.5m and 2.1m followers on its respective YouTube and Instagram channels.

But finding the right endorser isn’t that easy. Aside from the documented challenges of dealing with vacuous celebs famous only for being famous, it’s also damned expensive to buy Kim Kardashian’s temporary loyalty — up to US$500 000 per Instagram post.

Notwithstanding this, Forrester’s confident that spend will continue to grow. A large chunk of this will come from developing countries — China and India have a social adspend roughly 80–90% below the global average. So expect to see more Bollywood coming to a phone near you.

*This article originally appeared on MarkLives.com.